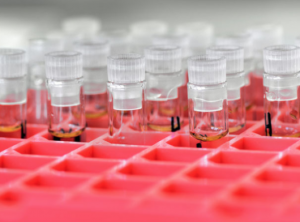 In response to the strong demand of biological protein therapeutics, such as monoclonal antibodies (MAbs), continuous downstream process was developed to deliver these molecules while maintaining desired product consistency and quality attributes, and providing manufacturing e ciency and  exibility. Viral safety is a cri- tical quality attribute for biopharmaceuticals, such as MAbs. Evaluation of the viral clearance by the downstream process is a key component of risk mitigation. Protein A chromatography is typically used as an initial capture step for MAbs and e cient for the removal of process-related impurities like Host Cell Proteins (HCP). This step can also contribute to the clearance of potential viral contaminants.

Murine Minute Virus (MMV)-spiking experiments were performed at small scale to investigate the impact on the viral clearance e ciency of the way the Protein A chromatography step is carried out, whether in batch or multicolumn mode. Protein A chromatography step using Novasep Sequential MultiColumn Chromatography (SMCC) technology demonstrated no statistical di erence in the viral reduction with reduction factor (RF) of 3.7 log10 (vs. RF of 3.8 log10 for batch). The experiments showed also similar viral distribution over the puri cation cycles and columns.

Data con rmed that the viral clearance capacity by the continuous Protein A chromatography step using SMCC technology is maintained and e cient.